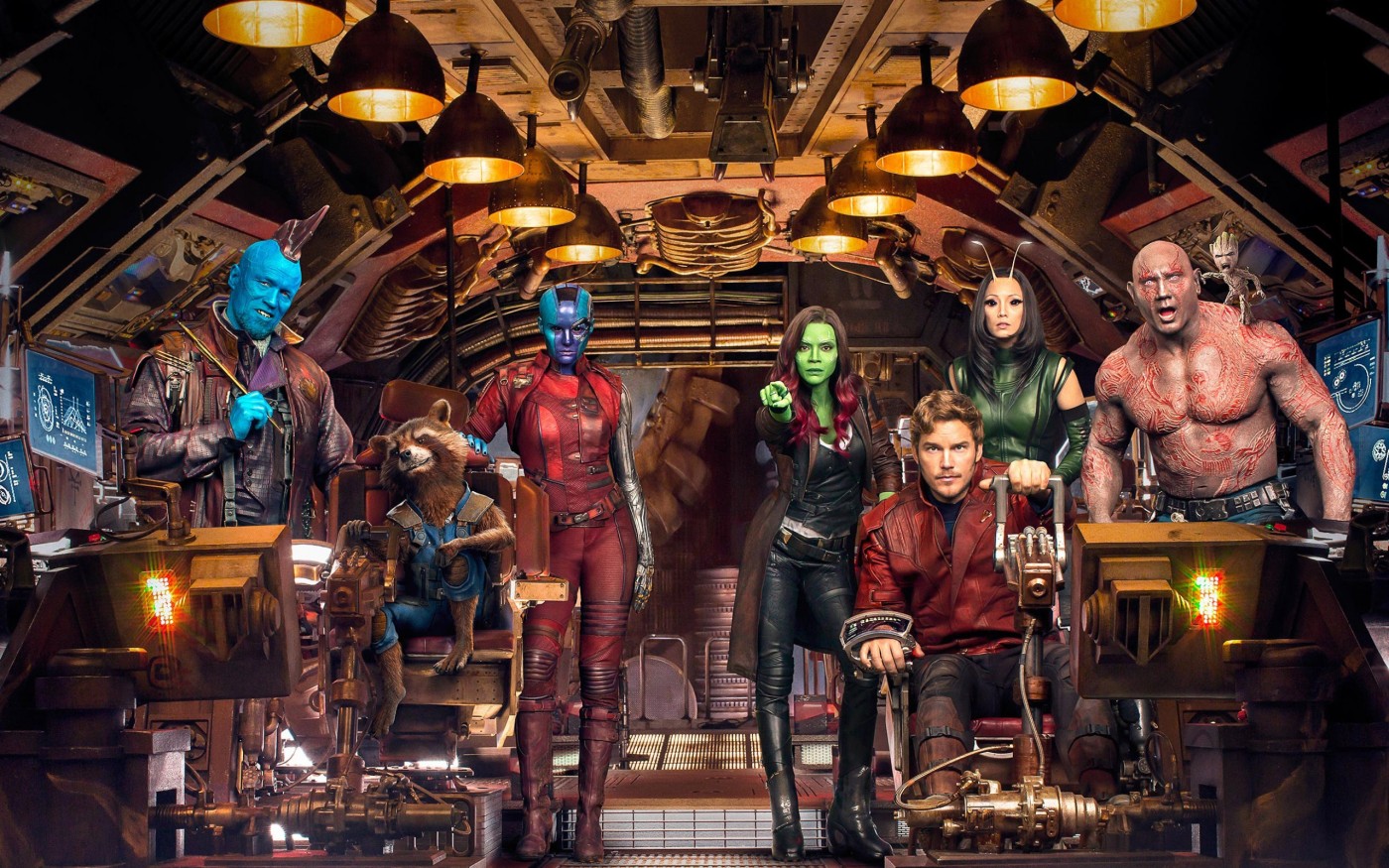 What’s up guys?  Ralph a.k.a. the “Perennial Aesthete” is here.  It’s been awhile, but I hope you’re all in the best of health and happiness.  Speaking of being happy, to describe Guardians of the Galaxy Vol. 2, the sequel to Marvel’s 2014 swash-buckling science-fiction adventure, I’d have to say it was pure euphoric bliss.  It brought back memories from my childhood when I used to sit in my room drawing comic book characters and reading my favorite comics such as Iron Man, the Avengers, Spider-Man and the Mighty Thor.

The much-anticipated Guardians of the Galaxy Vol. 2 more than lived up to its expectations.  It’s not exactly easy for Marvel to keep their films from getting formulaic and to constantly reinvent themselves, setting the bar higher and higher.  In the latest space adventure, Vol.2 centers on its titular characters of the intergalactic super-team: Chris Pratt as Peter Quill/Star-Lord, Zoe Saldana as Gamora, Dave Bautista as Drax, Bradley Cooper as Rocket Raccoon, and Vin Diesel as Baby Groot.  It’s a notch up from Vol. 1, now packed with more characters that you know will play a part in the ever-expanding Marvel Cinematic Universe.

Vol. 2 also focuses more heavily on Karen Gillan’s Nebula, Gamora’s sister, Michael Rooker’s Yondu, and the film introduces new characters such as Pom Klementieff’s Mantis, and the main antagonist, Kurt Russell as Ego, who is Quill’s father.  I won’t go into huge details for spoilers’ sake, but the colorful and exciting cast of characters absolutely made the film shine.  I loved everything about it… the music, the humor, witty dialogue, and amazing chemistry that made the film such a joy for me to watch.  It’s so cool that Marvel is introducing a growing number of lesser-known characters, in which only die-hard comic book fans will be familiar with.  For the most part though, Marvel has done an exceptional job of developing these characters on-screen and giving them the spotlight, even if it’s just for a brief moment.  Some of the movies are better than others, but either way, they’ve been doing a great job in laying the groundwork.

If Peter Quill/Star-Lord is the life of the movie, then Baby Groot was definitely the spirit of it.  I either smiled or laughed each and every time he appeared on screen.  I was a bit leery when I first learned that the studios were going to make Groot a baby.  Potentially, I thought that creative decision would’ve weighed the film down in too much mushiness, but that wasn’t the case.  It actually added an interesting dynamic, compared to the first film.  Groot’s babyhood isn’t just in his size. He also acts like a toddler. He gets distracted easily, throws tantrums when he doesn’t get his way, and doesn’t quite understand the gravity of certain situations that’s happening around him.

Despite it’s adrenaline packed visuals, I was pleasantly surprised with the right level  of emotion that was present in Vol. 2.  I also loved how the film was ushered forward by the 80’s music that runs from Quill’s cassette in his Walkman.  I think it’s safe to say that this is Marvel’s most important movie since The Avengers.  You can also make a strong case for the original Iron Man, in which Marvel sets off the post-credit scene hoopla with Nick Fury showing up at Tony Stark’s door at the end of the film.  With that being said, us Marvel devotee—who got spoiled waiting around for the post-credit scenes to roll, we get treated to five sequences.  That’s correct… five!  I was hoping that we get a hint at one of my favorite Marvel comic book characters, Richard Rider, better known as Nova, but Marvel may have put forth something better that’s coming.

In arguably the most baffling out of the five post-credit scenes, Vol. 2 returns back to the planet of The Sovereign to look in on Elizabeth Debicki’s Ayesha, who is royally pissed off, along with her golden race.  Infuriated over her back-to-back defeats, the empress grumbles to herself about her next plan of action, “the next step in our evolution — more powerful, more beautiful, more capable of destroying the Guardians of the Galaxy.”  All we see is a chamber of some sort, but fans of the comics know what’s inside: ADAM WARLOCK!!

In the end, Guardians of the Galaxy Vol. 2 is another exhilarating thrill ride through the deep reaches of the cosmos, in which film director James Gunn, triumphantly strikes gold again.  Classic tunes, epic battles, and the right dosage of comedy, Vol. 2 is another fine addition to the Marvel Cinematic Universe.  It’s a definite must-see. 8/10.

Personally, I can’t wait until Guardians of the Galaxy Vol. 2 is released on Blu-ray, in which I’m sure it’s going to come with a ton of extra features.  What did you think of the sequel?  Is it as good as or better than the first? What didn’t you like? How do you feel about the new members of the team?  I’m looking forward to reading your comments and views.

To my readers, I invite you to join me on Facebook and to follow me on Instagram and Twitter.  You can also reach me via email at:  rgilmore@orangemoonwerks.com. If you find any joy and value in what I do, would you consider providing support to help keep my blog going? Learn how by following the link here: Support the Blog